Mercury over 2014 goes retrograde 3 times. It usually does every year for about 21 days.The retrograde periods this year are from the 6th to the 28th of February, and that goes through Pisces and Aquarius.

The second time is 7th June to 1st July, and that goes through Cancer and Gemini.

And the third time is the 4th to the 25th of October, and that goes through Scorpio and Libra.

You may notice that there are three Water signs and three Air signs, but the actual moment of going into the retrograde phase is happening all three times in Water signs.

In general, Mercury retrograde periods are a time when things that we’re used to – in this very mind-driven world that we live in – start to stall, like the engine, the wheels sputter, slow down, the gears aren’t working properly; it can literally affect vehicles in fact, and also communications equipment.

I usually find that it’s people who’ve got strong Mercury emphasis in their chart, like a Mercury ruled sign (Gemini, Virgo) or a rising sign or moon sign, or indeed the planet Mercury is in a prominent position; that these people usually are more sensitive to the Mercury retrograde times. But all of us are being involved, because if it’s not to do with us in our chart, it’s the people we’re trying to connect with – that letter that hasn’t turned up yet, or that call that hasn’t arrived that we were expecting which we needed to hear from that person about that thing because once we’ve heard that we know what to do about this thing over here, which connects with that thing over there.

So Mercury retrograde times can be exasperating, and things get delayed, we have to rethink, we have to reschedule, we rebook, we have to reboot, we’ve got to rework, we’ve got to review, we’ve got to tweak things, we’ve got to rethink in some sort of way, so rather than be exasperated and tearing our hair out and feeling frustrated – particularly with it being in Water signs over 2014 – why not work with it? And working with it, particularly in the Water signs which are about emotion and about reflection, is actually to slow down as much as we can; engineer spaces in this bustly, busy world where our minds are running pell-mell, and almost running us, scripting us; it’s very unusual, except in meditation, that our minds are ever quiet, and of course during sleep as well.

So in Water signs it’s to slow down and connect with deeper levels somehow or other, and connect through maybe the heart more. So not so much expecting everything to click together with the mind, with communications, across the wires; but experiencing listening and coming more from the heart.

So getting ourselves into the situation where we can do that, like just going out for a walk and smelling the flowers; getting near water, that would be good. And just chilling out and looking at the water and reflecting, taking stock, pondering things a bit more. Being more sensitive to ourselves and what our inner needs are; taking the pulse in the shower in the morning, “How am I today?”

Because of course there are so many vibrational whims at work all the time. As an astrologer I’m more aware of that; it’s vibrational weather – that’s how I see astrology. It’s not as tangible as the weather we can see with the wind making the trees move, or the sun burning our skin, or making our backs feel warm. But it is vibrational weather.

And these Mercury retrograde times, particularly 2014 in all three of the Water signs is an opportunity. So if we don’t see Mercury retrograde as a time of setbacks, but a time of opportunity to take stock, ponder, review the past maybe, be more sensitive in how we’re coming across to others, being perhaps more sympathetic and receptive and also being sympathetic and receptive to ourselves. So being more contemplative, and definitely going into meditation, sitting down and doing a bit of writing therapy, listening to music, going dancing or other Watery things like photography, anything to do with the arts, film. Just really being more aware of the meaning behind the words.

Mercury retrograde, especially in the Water signs, might be because Mercury rules words, language, so being more aware of a deeper facet of Mercury when it’s going retrograde is to be more aware of not just the outer shell of the meaning, which is the word, but what’s inside the shell, which is more to do with the meaning.

So yes, having to strive a little bit harder for absolute clarity in communications, because there can be crossed wires. The world doesn’t go away, but taking whatever space or time you can and set the intention that you are going to be listening more from your gut, from your heart.

Mercury retrograde times can mean things are a little bit up in the air, or what you thought you heard, or what you thought you meant got misconstrued, or indeed it can happen the other way around. So just going slower, connecting more with nature, connecting more with animals, children, connecting more with the deep heart beat of Mother Earth, touching base with Source, or Higher Self (however you want to see it), allowing ideas just to gently flow up to the surface from deeper levels, letting go as much as you can of what that record that’s got stuck in your brain about a problem, and trying to find the solution, “I need the answer, I need…” Let it go! And allow.

We don’t give our bodies enough credit or our whole beingness enough credit, and when I say “beingness” I mean outside of the body, how we are linked to realms beyond. We don’t give them enough space, because actually when mind is in the way, “chitter chatter, chatter, chatter,” all the time, it sets up static, it sets up a barrier against hearing from a different part of our being; not through the five senses, not experiencing and connecting with the world through the five senses, but hearing more from – I don’t know what you call it – the heart, the soul, the spirit, the ‘I am’.

And probably letting go as much as we ever can in this world where we’re busy and we’ve got to be places, and do things and think things out, and talk with people. But letting go a little bit more of all of that.

And also doing less judgement. We’re in a world that is run by judgement, weighing things up, and of course that’s natural because we are living in a polarised, dualistic dimension here. But just beyond this dimension we get out of judgement. So trying to let go of judgement, going more with the flow, Mercury retrograde being in the Water signs. And seeking to resolve conflict, because once we give out a judgement, conflict just sort of dissolves away. And once we get out of conflict, we begin to feel less fearful. But, most of us have got a long way to go before we can get completely out of fear. But I think that is probably one of the targets here, and quite a lot of us who have been here many times have been working on it.

So great time to clear up old rubbish, declutter, detox, go down the dump physically, but also rubbish emotionally, clearing that out as much as one can mentally, of course, and psychically.

Just coming more from the heart and letting it be and not try to row ferociously upstream against the current, but just go with the flow and put yourself in situations where you can come more from the whole of your beingness, and not just with this little section of the body.

So I hope you found that interesting. 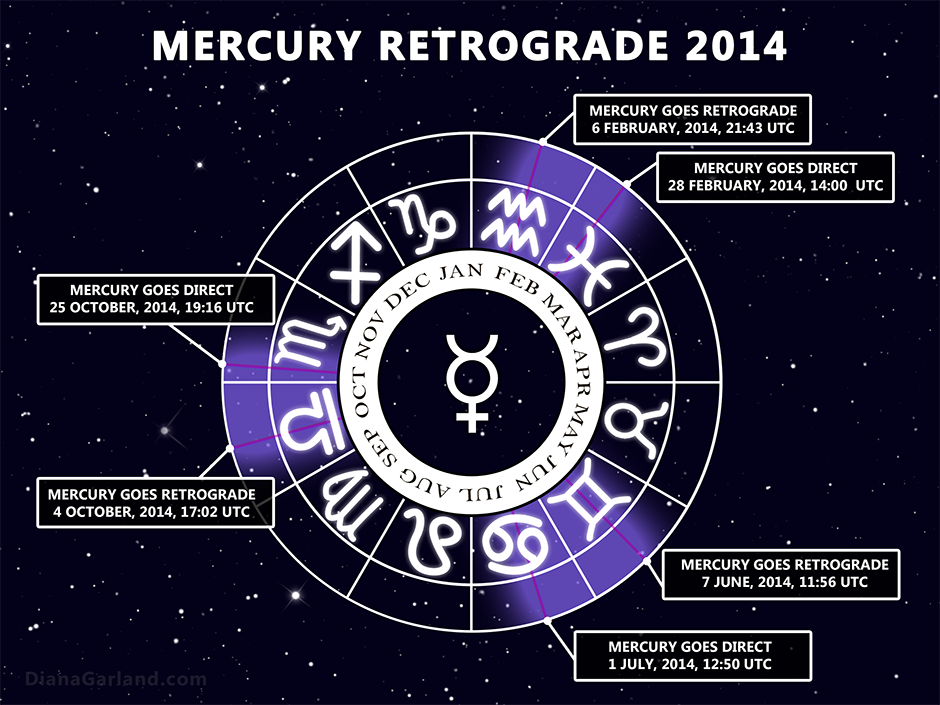 Mercury is first retrograde in February 2014.

Mercury is next retrograde in June.

Mercury's second retrograde phase will begin in Gemini on the 7th of June, 2014 at 11:56 UTC, and will remain in retrograde for three weeks until turning direct in Cancer on the 1st of July, 2014 at 12:50 UTC. The pre-retrograde shadow will begin on the 24th of March, and post-turning direct the shadow period will last until the 15th of July.

The final Mercury Retrograde is in October.

The final Mercury retrograde phase of 2014 will begin in Libra from the 4th of October at 17:02 UTC, and will last until Mercury turns direct for the last time of the year in Scorpio on the 25th of October at 19:16 UTC. Before turning retrograde, the pre-retrograde shadow will start on the 19th of September, and after Mercury turns direct there will be a final shadow period lasting until the 10th of November.

Mercury Retrograde is the name for the temporary apparent backwards motion of the planet as it moves through the signs of the zodiac on its journey across the skies through the year. 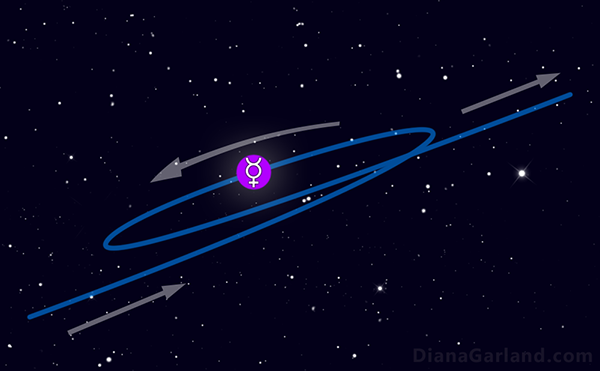 Mercury only appears to be going backwards during a Retrograde period.

It happens around three times each year, each time lasting for approximately three weeks, though astrologically speaking there is a shadow phase for almost 2 weeks on each side of the retrograde period during which its effects can be increasingly and decreasingly felt.

So from an astrological perspective from Earth, during these retrograde periods we see Mercury start to track backwards through the sky. However Mercury doesn't actually go in reverse motion; it is always moving forwards. The effect is quite similar to that of looking out of the window while you are on a fast train that is passing a slower train, where the slower train appears to be moving backwards, though that is only due to the relative position and speed of the two trains.