Venus in the natal horoscope represents how we love, what we find beautiful and the characteristics of those we are attracted to. She shows what/who we admire and how we show our appreciation and affection. Venus also stands for money and possessions and how we use them when we have them. Her position in the chart also shows how material resources like money and property come to us.

In a female’s chart the condition of Mars should be noted for indications of what a woman is looking for in a man.

I don’t have a TV but the radio is usually on in the background and I was listening to reports about the present ‘scandale’ in La Belle France involving Francois Hollande, Monsieur Le President, and his partner of 7 years, to whom he is not married, Valerie Trierweiller la Premiere Dame de la France.

I already knew from a previous glance at her chart that Valerie is a non-conformist, outspoken Aquarian and I wondered why she was being so submissive and mouse-like, forgiving Hollande for his secret affair with actress Julie Gayet, offering to “take him back” if he would have her.

So, I pulled out my secret weapon – astrology – and had a look at their Venuses.

Due to Venus’s close aspect with Mars it’s probable he has a high libido and reasonable stamina in the bedroom.

The condition of Hollande’s Venus reveals no surprises as it shows he prefers feisty, independent, intellectual (airy) women and his whole attitude in the love department is that it is sport wherein ‘la chasse’ is much more fun than the kill (as it were). Due to Venus’s close aspect with Mars it’s probable he has a high libido and reasonable stamina in the bedroom. But emotions are well protected according to his Moon in Capricorn and he is capable of shutting them down completely.

Valerie’s Venus is very different. It’s in Aquarius and there are strong connections with Jupiter/Neptune/Uranus/Pluto.

Her love nature wants to put the beloved on a pedestal. The object of her affections has to be no less than super-human – a hero and a gift to the world. Her support for this ‘God’ is unquestionable and her female power will feed him like a flower surrendering its nectar to the collecting bee. Her affections are stimulated by a highly principled intellect and an individualistic, eccentric style with aspirations to revolutionize society. She will be attracted to someone who more-or-less fills this brief and her inner child’s need to idealize the ‘father’ will project the image she desires upon this person.

Unbeknownst to Valerie, she herself holds all these gifts within but somehow cannot see herself without using the mirror of the ‘other’ to reflect her own power back to her – as if it was theirs alone.

Her Mars shows a liking for an articulate, imaginative man with inspirational communication skills. 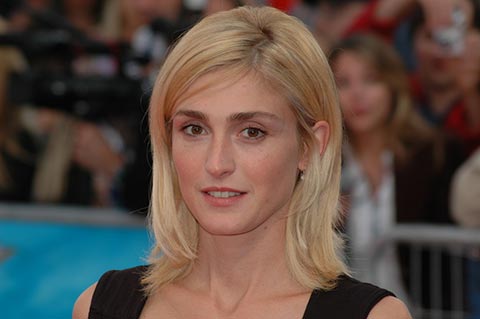 So then I turned to the chart of Julie Gayet the actress, and was interested to find that her Venus, although more emotional and needy in Cancer, also has the same strong connections with Jupiter/Neptune/Uranus/Pluto. So ditto for the general inclination to worship the beloved who can deliver oh so much more than the run-of-the-mill mere human male. The model for this man is powerful, a practical reformer with God on his side. But she has a profound need for total merging with the object of her affections. Her Venus/Pluto says “I will always need you to give me more love, I want nothing less than your soul”. Venus/Pluto is very intense and possessive – even obsessive.

Her Mars shows she will be drawn to an adventurer and a risk-taker but someone with a genuine commitment to improve things in his community.

So the ‘player’ in Hollande may find there is more than he signed up for with this pretty Geminian 20 years his junior. The relationship will be emotional and turbulent at those times she feels he is not totally inhabiting the ‘world’ she creates to embrace (some would say corral) and nurture him – whether he likes it or not.

And Valerie, whose rose-tinted bubble was burst with a curt 18 word statement put out by Hollande to say he was ending his “common life” relationship with her, came down to earth with the proverbial bump. The almost brutal nature of her dismissal provides quite a contrast to a statement he made at the beginning of their liaison when he ‘came clean’ about the affair to his partner or 25 years Segolene Royale. He is reported to have said of Valerie; “She is the woman of my life”.

But no mere mortal could ever rise to the impossibly high bar Valerie sets for the man in her life. And it’s just possible that this cruel blow will be the nasty tasting medicine she needs to take back her power and begin enacting more of her own potential in the world.

And what better place to start than to write a book about her life with Hollande and his careerist cronies in their upwardly mobile rise to the top of the heap. Cathartic and therapeutic indeed!

Editors note: Diana is not the only person to comment on this situation. See what Debbie Frank has to say here.